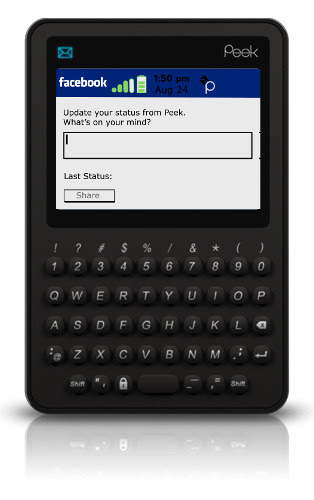 Stories have steadily flowed in over the past day about the death of the Peek, an unusual gadget resembling a portrait QWERTY smartphone (think BlackBerry) sold in various forms between 2008 and 2010. It wasn't a phone, though — in fact, it was originally designed to handle email alone using T-Mobile's 2G data network. Service ran $19.95 a month, but the device could occasionally be purchased for $299.95 bundled with "lifetime" service, which meant you had no monthly bill. For smartphone owners, Peek was obviously a tough sell, but it found its niches among the hard of hearing and those without the need for a smartphone (and the pricey smartphone data plan to match).
Tech site "The Verge" confirmed with Peek CEO Amol Sarva today that all versions of the Peek have been decommissioned and will no longer function on the network, including the Peek Classic, Peek Pronto, and the newest model introduced in August of 2010, the Peek 9. Says Sarva, "We have been winding down this group of users since Q4 2010 with these original Peeks. We kept service live and a 'few' people still love their Peeks (flattering!) but the network requirements are changing and we can't keep the network up forever with a handful of people on it."
"We have been sending out emails for like a year saying so, but some folks are always surprised."
"The Verge" asked exactly what network requirements have changed, Sarva says it's a combination of things: "billing interfaces, data gateways, secure tunnels, SMS gateways, IP addresses of these systems, credentials for them." The company had already swapped out users' Peeks to manage changing infrastructure once before, in mid 2010, spending "tons of money" in the process — presumably, there weren't enough users remaining in 2012 to do it again, particularly considering Peek's changing focus as a company. "The devices worked for years, were a great value to start with, and nobody is paying us any new money for anything... did anybody think we were going to somehow offer service untilthey died? That is silly."
Indeed, Peek isn't in the hardware business anymore. Since last year, the company has been selling "the genius cloud," a series of services designed to make inexpensive feature phones smarter. Sarva notes that his product has just been nominated for the GSMA's Best Technology award which will be handed out at MWC later this month. He says that these services are the logical continuation of what Peek has been about since day one — "building smartphone features on ultra low cost platforms" — and that they're making huge inroads with the countless Chinese manufacturers who sell unbranded phones in emerging markets, many of whom are "feeding off Nokia's carcass."
Of course, that's little consolation for the handful of Peek users out there in the US, particularly those who paid $300 or more for "lifetime" service. How can you get a Peek-like device now? "Good question. Not possible. The US market is crazy expensive and you cannot get a cheap easy connected device. You have to pony up $50 or more per month. That sucks, but Peek is too small to change that."
Posted by "The Phone Ninja" at 12:04 PM