The LG Watch Urbane 2nd Edition LTE, which was announced last month is the first Android Wear device to support cellular networks. LG, Samsung, and others have sold cellular watches in the past but none ran Android Wear.

Google says cellular equipped Android watches will automatically switch from Bluetooth or WiFi to cellular when needed for connectivity. Google fully expects people will be able to use their Android smartwatches to answer calls, read emails, dictate text messages, and manage their fitness all while on the go. 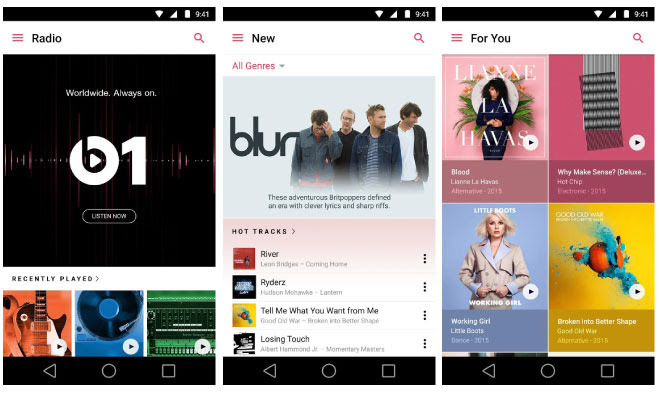 Android users can now begin their three-month trial of Apple Music, though Apple says the beta does come with some restrictions. Music videos are not yet available, and the sign-up process hasn't been optimized for Android purchasing or upgrading to a family membership will require a Mac or iOS device.


Just like those on iOS, tvOS, and Mac Apple Music users on Android can access playlists, Beats 1 radio, Connect, and iTunes purchases.
Apple appears to have adapted the application's user interface slightly to conform to Android interaction paradigms, but doesn't seem to have adopted Google's material design.
Apple Music requires Android 4.3 or above. Users can download Apple Music beta for free from the Google Play source link below.
Source: Google Play
Posted by "The Phone Ninja" at 9:04 PM No comments: