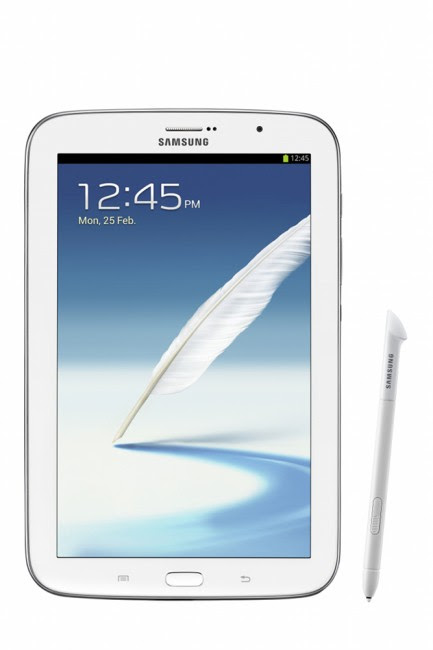 Samsung has announced the Galaxy Note 8.0, a device that is expected to “re-ignite the mid-size tablet category.” It sports a 1.6GHz quad-core processor, 8″ (1280×800) display, 5MP rear camera, 1.3MP front camera, 2GB RAM, 16/32GB storage, 4600mAh battery, HSPA+ radios, and runs Android 4.1.2. It also supports S Pen and all of the multi-tasking software that you have come and love to know on all of the Note products. An IR sensor rounds out the specs, taking advantage of Samsung’s TV remote capabilities.
As you can see from the pictures, Samsung kept to the design language of the Note 2 and Galaxy S3 by sticking with a physical home button, and soft touch back and menu buttons. In what may be the greatest feature of all, though, Samsung has finally allowed the S Pen to interact with the soft menu and back buttons. That’s right, you can now tap on the soft keys with the S Pen and make magic, something you cannot do on any other device including the Note 2.
The international version can technically make phone calls, so yes, you can hold an 8″ tablet up to your ear and look that silly if you so choose to. We don’t know if that functionality will carry over to the U.S. version.
Pricing and availability has not been announced for the U.S., but the device is expected to be available across the rest of the globe in Q2 of this year.
Posted by "The Phone Ninja" at 1:58 PM