Is T-Mobile using 1900 band to test there 84Mbps HSPA+ deployment? 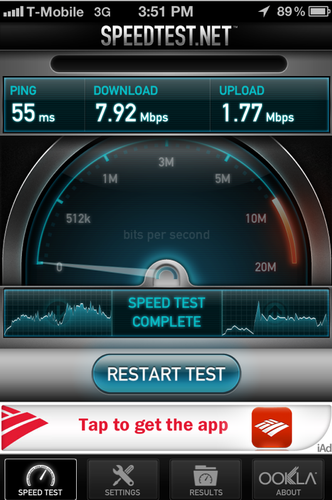 Ever since T-Mobile launched 3G service in 2008, it's used AWS exclusively — the 1,700MHz band auctioned by the FCC in the middle of the last decade — while keeping its legacy 2G services confined to the 1,900MHz PCS band. That might change, though, as the carrier looks to keep pushing on HSPA+ to deliver ever-higher 4G-like speeds in the absence of a clear LTE plan (and the absence of an AT&T acquisition). T-Mobile has already lead the way on deploying 21 and 42Mbps HSPA+, but the 3G roadmap doesn't end there: 84Mbps networks are a reality and the chipsets exist, it's just a question of securing the bandwidth to deploy it.
To that end, TmoNews noticed through HowardForums that unlocked iPhones connected to T-Mobile are picking up spots of 3G service in a few locations. What does that have to do with anything? The iPhone doesn't support AWS at all — the only band T-Mobile is known to be using for HSPA+ so far — which means that the carrier appears to be testing HSPA+ on its 1900 holdings, a prerequisite to deploying dual-carrier 84Mbps service. The site points out that most of T-Mobile's recent smartphones support 1,900MHz 3G, and this would explain why.
For owners of unlocked iPhones (and other unlocked devices that don't support AWS) on T-Mobile, this is potentially great news: in the long term, you might be able to move around the country and pick up a fair bit of 3G service. Meanwhile, it seems likely that we'll see the carrier deploy branded modems and handsets before too long that take advantage of 84Mbps HSPA+
Posted by "The Phone Ninja" at 11:59 PM