Google Voice Gets A Redesign, Rolling Out Now To iOS

Google announced that Google Voice would be rolled in to G Suite and showed off a redesigned app during Google I/O. The new Google Voice is now rolling out to iOS devices.

“Calls” is now the first tab in the bottom bar. Followed by a new “Contacts” section that provides dedicated access to your address book, “Messages” is now the third tab with, “Voicemail” still at the very right. There is a quick shortcut for adding new contacts at the top of the list, with the addition of edit existing contacts.

The Contacts and Calendar based DND is limited to enterprise G Suite accounts. Regular and free Google accounts will continue to see Messages as the first tab followed by Calls and Voicemail. Keypad is the fourth tab, while the Calendar integration does not appear in Settings for non G Suite users.


Source: Apple App Store
Posted by "The Phone Ninja" at 12:21 AM No comments:

Apple made a new beta of iOS 12 available to its Developer community. iOS 12 Developer beta 7 was released today to registered developers.

Apple didn't spill the beans on specific changes in this build other than bug fixes and improvements. iOS 12 Developer beta 7 includes a number of new features, such as improved notifications, memoji for the iPhone X, performance refinements, Screen Time for monitoring usage, and better security.

Apple has however, pulled the Group FaceTime feature according to a report from The Verge. "Group FaceTime has been removed from the initial release of iOS 12," said Apple in a message to developers. Instead, Group FaceTime "will ship in a future software update later this fall." The final version of iOS 12 won't arrive until September or October. A new public beta is expected to arrive later this week.

Apple has taken notice, pulling the OTA update from its servers. Developers still have access to the IPSW file, which is available for download and manual installation via Apple's Developer website.

We’ll stay tuned for a new build of the iOS 12 Developer beta 7 release to become available for over the air.


Update: Apple has also removed the update from the Apple Developer Center.


Source: The Verge
Posted by "The Phone Ninja" at 8:56 PM No comments: 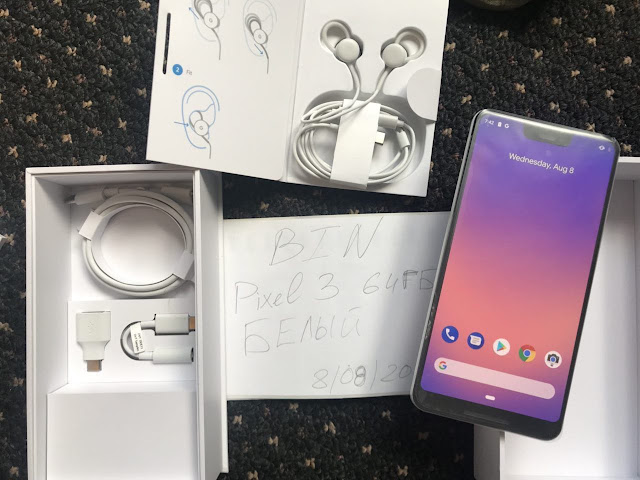 Google is set to announce the upcoming Google Pixel 3 and Google Pixel 3 XL in the coming months, today we got a major leak. The leak shows the phone, retail box, Pixel Buds like USB-C headphones, and charger.

The leak comes from a Russian Telegram channel, the photo shows the white variant of the Google Pixel 3 XL. Compared to the first two Pixel devices, the separation of the glass on the phone’s rear is almost invisible. Google's single camera lens is still a go, just like the existing Google Pixel and Google Pixel 2 devices including the fingerprint reader and Google logo at the bottom.

The leaked photos and video shows the phone fully booted with a shot of the settings revealing the “Google Pixel 3 XL” model name and even the device’s serial number (not a good move leaker... lol). The “Hardware version” in settings is listed as “DVT1.0.” which stands for Design Validation Test and is usually a revision prior to final production.

The leaked device looks to be running Android 9 Pie, the device has successfully gone through the initial Pixel Setup process. Gesture navigation is on, and said to be enabled by default on the Google Pixel 3 devices. A hardware specifications app confirms the Qualcomm Snapdragon 845 processor, 4GB of RAM, and 1440 x 2960 display with a 494 PPI. The SIM card slot is located at the bottom left of the phone next to the USB-C port. Including in the box are Pixel Bud style headphones with the same rounded bud design and adjustable ear inserts as the current Google Pixel Buds, and have ditched Bluetooth in favor of a USB-C port.

Google has revealed that Android 9 will be called Pie and made Android 9 available to its Pixel branded phones. Android Pie makes use of artificial intelligence to anticipate user actions. For example, it includes adaptive battery and adaptive brightness. Together, this will adjust the settings throughout the day to reduce power drain while making sure users have access to the phone’s full power. App Actions predict what users are likely to do next based on their context and displays that action on the phone.

Android Pie introduces new navigational gestures that rely on swiping and flicking a small pill that appears at the bottom of the screen. The smart text selection tool now transports text more easily between apps, while the tweaked Quick Settings bar offers a better way to take and edit screenshots. The new dashboard is meant to help you use the phone less. Which includes an app timer, wind down, and an improved do not disturb mode to make sure people spend time away from their phone without interruptions.

These well being tools are only available in beta, and currently requires a beta invite from Google (Digital Wellbeing beta link). The new Android 9 OS also includes a number of security improvements, such as a more secure way to handle biometrics. Google is distributing Android 9 Pie to Google Pixel, Google Pixel XL, Google Pixel 2, and Google Pixel 2 XL devices via an over the air download. Android 9 will also reach select phones from Sony, Xiaomi, HMD Global, Oppo, Vivo, OnePlus, and Essential (Essential PH-1 Android 9 release), as well as all qualifying Android One devices later this fall.


Source: Google
Posted by "The Phone Ninja" at 8:38 PM No comments: 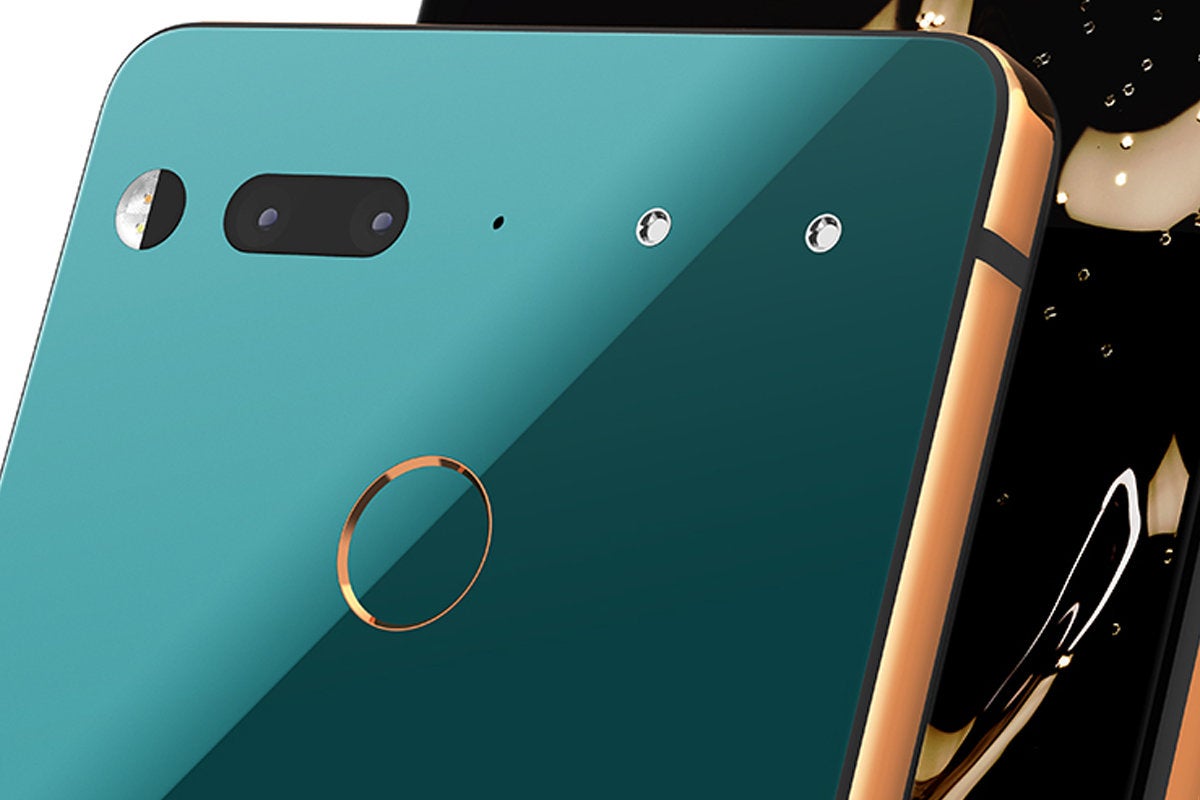 Essential Products has done it again... owners of the Essential PH-1 will receive Android 9 Pie over the next few days.

“We’re proud to bring Android 9 Pie to Essential Phone the same day it’s released! Check your phone now for the update,” said Essential via its Twitter account. Essential has allowed PH-1 owners to beta test Android 9 over the last few months. According to Essential, the Essential PH-1 will gain Android 9 via over the air over the next few days.


Source: Essential
Posted by "The Phone Ninja" at 8:18 PM No comments: Samsung has officially unveiled the Samsung Galaxy Tab S4 along with slimmer bezels, audio tuned by AKG including four speakers, and sports a 10.5 inches sAMOLED screen with a resolution of 2560×1600.


Meanwhile, there is a Qualcomm Snapdragon 835 processor, 4GB of RAM, and either 64GB or 256GB of built in storage. There is a 13-megapixel camera on the back, and an 8MP camera on the front. Samsung has opted to remove the physical home buttons on the Samsung Galaxy Tab S4 in lieu of on screen home and navigation buttons, making the iris scanner and facial scanning the go to biometric security and authentication method.

Samsung says that the Samsung Galaxy Tab S4 has DeX support built right into the software, and the tablet can support having up to 20 different windows open at the same time.

ZAGG announced that it has acquired BRAVEN from Incipio Group, the company did not mention how much it paid for the audio company. Incipio Group purchased BRAVEN back in 2013, in an effort to expand its brand and products that it sells. Which makes it interesting that Incipio Group sold BRAVEN to ZAGG.

In the press release issued yesterday, ZAGG mentions that the BRAVEN acquisition is going to allow ZAGG to extend its leadership position in the world of smartphone accessories. ZAGG will be able to leverage BRAVEN’s focus on product, brand, distribution and operational excellence.

BRAVEN is quite well known for its popular rugged speakers and headphones. While BRAVEN’s speakers don’t match up to Sony, Bose, and Beats in terms of sound quality it does offer great sound in a rugged build. Some of the speakers are rugged enough to be run over with a car which is pretty impressive.

ZAGG says that it will leverage BRAVEN’s broad retail presence,global distribution channels and supply chain which will help ZAGG boost its sales and profitability.