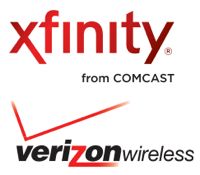 Verizon Wireless acquired 122 AWS spectrum licenses late in 2011 from a JV of cable companies including Comcast, and the partnership between the two has quickly grown. Now, the two companies are ready to launch their new product bundle - wireless, cable-TV, landline, and residential Internet in Seattle and Portland, Oregon.
The marketing effort will continue and spread this year, and by 2013 it’s expected to cover major US markets. Verizon Wireless will promote Comcast’s Xfinity in its stores, while Comcast will in turn promote Big Red services on the phone and online.
But the most exciting aspect of the partnership - the new products that the two companies are developing will only show later on. Verizon and Comcast are working on bringing seamless streaming between wireless devices and cable TV.
In the last month, both Verizon and Comcast have been training call-center staff to take calls for the new products and bundles.
"Are we ambitious? Absolutely, we are ambitious," Catherine Avgiris, senior VP and general manager of communications at Comcast said.
Posted by "The Phone Ninja" at 10:31 AM