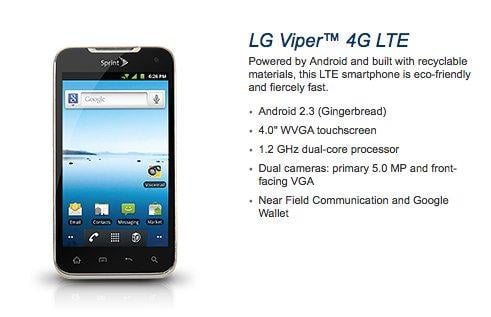 The race between the LG Viper 4G and Samsung Galaxy Nexus to become Sprint's first LTE phone isn't over yet, but at least now we know when one of those phones will be released. Today, Sprint announced that the Viper will be available on April 22nd, and customers who pre-order one starting today could get it as soon as April 20th. The mid-range phone is selling for $99.99 with a two-year contract and after a $50 mail-in rebate, and will run Android 2.3 on a 4-inch screen.
As we saw earlier, the Viper 4G is being billed as the "first 4G LTE device from Sprint with eco-friendly features," and Sprint says it's going to be "one of the first smartphones" to run on the new LTE network, so we wouldn't be surprised to see the Galaxy Nexus come out around the rumored April 22nd date as well. Sprint's LTE network still hasn't turned on, and there are rumors that the Nexus will ship with 4G off by default; in the press release, Sprint still puts the network at a "mid-year" launch. However, promoting the Viper as an LTE phone suggests it may be coming soon.
Posted by "The Phone Ninja" at 12:34 PM