Install Android 3.2 Honeycomb With Android Market on Your Laptop 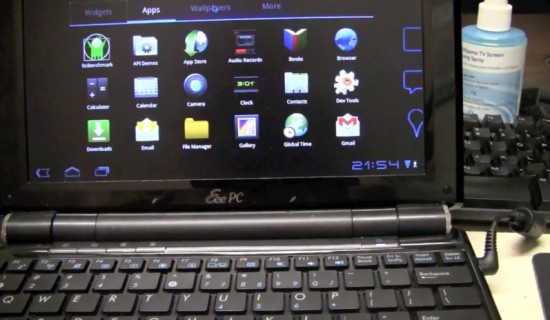 There’s a little open source project going on called Android-x86 that aims to get Android up and running on your laptop or desktop PC. The results so far? Almost fully functional builds of Android 3.2 Honeycomb booting on a various netbooks and laptops.
The process involves downloading the Android ISO then using UNetbootin to install the image to a USB stick or SD card. After that, you’ll have Honeycomb up and running on your PC. Most of the PC hardware like WiFi is working just fine and they’ve even managed to get the Android Market installed. Must of the luck users have been experiencing is with ASUS branded PC’s but there have been reports of others working with a few glitches.
I would imagine Ice Cream Sandwich development will pick up steam now that the source for Android 4.0 has been released. If you want to give Honeycomb a spin on your PC, hit up the source link for downloads and further instructions. I’ve included the video below of one user who got Android 3.2 booted up on his Eee PC netbook. Cool stuff.
Posted by "The Phone Ninja" at 10:50 AM